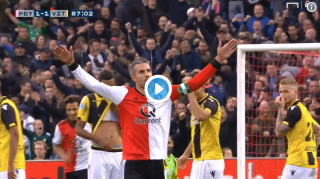 Former Manchester United striker Robin van Persie scored an absolute screamer to win the game for Feyenoord over the weekend.

Van Persie’s incredible free-kick shows he’s still got it with that gem of a left foot of his, that served him so well in a successful Premier League career with both Arsenal and United. Well, United where he eventually won a league title…

Right now, the Reds aren’t in the great form and the likes of Alexis Sanchez and Romelu Lukaku look far from at their best.

It’s moments like this we really miss players like Van Persie, who scored pretty much the same goal against Manchester City in 2012.

Take a look at the video below, plus a throwback to that free-kick against City. They’re similar but you know which one we prefer!

Not the first time Robin van Persie has scored a free kick to secure a late win. 😉 #mufc pic.twitter.com/cTnlH0NKMA