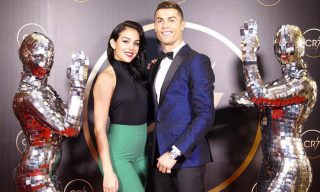 On Friday, we brought you a report from DER SPIEGEL which saw an American woman named Kathryn Mayorga claim Cristiano Ronaldo is the man who raped her in a hotel room in 2009.

The report states Mayorga, 34, was raped by Ronaldo in Las Vegas before he paid her a huge sum of $375,000 so that she would never again speak about that night.

It seems, however, that the Portugal international has the support of his partner Rodriquez, who posted a loving message alongside a photo of her posing inside the Allianz Stadium.

Her message translates as: ‘You always transform the obstacles that are put in your way into impulse and strength to show how great you are. ‘Thank you for making us enjoy each game. Always more and better. I love you @cristiano’.

Ronaldo’s legal team have already hit out at the accusations, as reported by the Telegraph, but the former Manchester United star will hope this blows over soon or he could be in serious trouble.

Allegations should never be taken as fact, but they should be taken seriously and investigated…