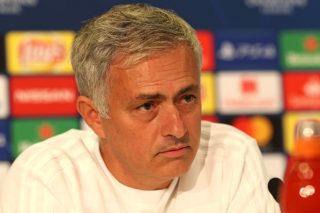 Jose Mourinho was talking to the media ahead of Manchester United’s Champions League encounter against Valencia.

The manager is under intense pressure after a difficult start to the season and needs run of results in order to avoid the sack.

However, when asked if his job is on the line if results don’t improve, Mourinho said: “No. I don’t think [so].”

Valencia, on the other hand, have also had a tough start to the La Liga season, winning just one game from their opening seven. They also lost their opening Champions League fixture 2-0 against Juventus.

With the league out of question now, a good run in Europe is the best we can hope for unless the Reds can go all the way in the FA Cup.

United go into this fixture on the back of a 3-0 win over Young Boys in our previous Champions League outing.

Mourinho appeared to take a dig at some of his players, by claiming there are some who care more than others.

He was also asked about an alleged phone call from Zinedine Zidane after a story by Neil Custis emerged in The Sun this morning.

Mourinho tries to laugh off reports Zidane called him over the weekend. Crucially – he didn’t deny them #mufc

A humorous response but as James Robson alludes to, Mourinho doesn’t deny the report.