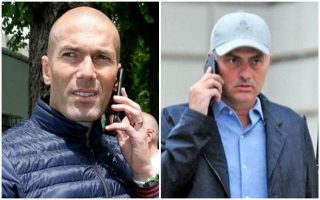 Zinedine Zidane has reportedly called Jose Mourinho to assure him there is no plot going on behind his back.

That is according to The Sun, who brings us this report on the back of French legend Zidane being heavily linked to taking over the Manchester United job from Mourinho.

It is no secret that the Portuguese tactician is under intense pressure at Old Trafford after a month or two of inadequate results and performances. Mourinho’s style of football has also failed to excite United fans, who tend to appreciate a more attacking brand of play.

Zidane is currently a free agent after walking from the Real Madrid job last summer, on the back of his third consecutive Champions League title as manager of the La Liga giants. He also won the league title during his managerial stint at the club.

It has been reported on many occasions, even by ourselves, that United met with Zidane in Los Angeles to hold informal talks about the position back in August.

But it now appears Zidane has phoned Mourinho to ease his fears and reveal that his representatives questioned whether he would like the job if it became available.

The Sun also claims Mourinho has given a week to turn his misery start to the season around.