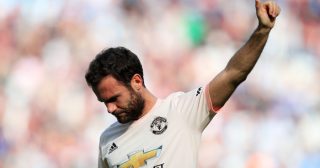 Juan Mata cut short his weekly blog post and summed up the mood in the dressing room at Manchester United for supporters on Monday.

Jose Mourinho’s side fell to their third Premier League defeat of the season against West Ham on Saturday, losing 3-1 at the Olympic Stadium.

It’s been an atrocious two months for the Reds, with a title race already out of the equation as well as the League Cup after being knocked out by Championship side Derby County.

Saturday saw another dire performance from United which has heaped even more pressure on the manager and it sees the team languishing in 10th pace in the Premier League standings after just seven games.

On the pitch, the players seem uncomfortable in possession and unwilling to express themselves, while off it, Mata has delivered a sombre message to fans which describes how they are all feeling ahead of the Champions League encounter with his former club Valencia on Tuesday.

“Hi everyone. Today, my blog post is shorter than usual. In fact, it isn’t really a time for posts,” The Spaniard said in his blog post at the start of the week.

“I want to thank all of you who support us during these tough times. I understand your frustrations.

“The upcoming game against Valencia is a special one for me, but above all it is another chance to get back to winning ways. Best wishes.”

It is not the time for posts. https://t.co/xTsWrya6SY

The 30-year-old playmaker’s sadness seems to be shared by his peers if their body language is anything to go by. Mata is now one of the senior players at United, so, hopefully, against Valencia he can lead by example.