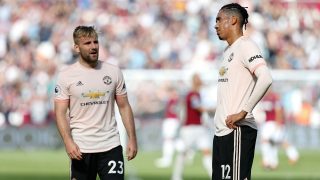 Manchester United left-back Luke Shaw did not hold back in his assessment of the team’s performance in their shocking 3-1 Premier League defeat to West Ham at the weekend.

The Reds’ recent slump continued with a lacklustre display at the London Stadium, resulting in their third league defeat of the season in just the first two months of the campaign.

This marks United’s worst start since the infamous 2013/14 season under David Moyes and we can now completely rule out winning the Premier League for another season.

Shaw, who has been in terrific form of late (one of few), pulled no punches with a frank and honest analysis of how the Reds played, calling them ‘horrendous’ – which is hard to argue with…

United sat back from the very start and left The Hammers pile the pressure on. They punished our woeful defending and to make matters worse, we never looked half as threatening on the counter. What counter?

Unless we improve fast, Mourinho will get the sack very soon.

‘If you want the truth I think it was honestly horrendous,’ Shaw is quoted in the Telegraph.

‘We didn’t look like a team that was going to beat West Ham. I think individually and as a team we were awful. That’s not good enough.

‘It’s hard to take and we’re sorry to the fans for what they saw. It was not good enough from a Man Utd team with all the talent we have.’