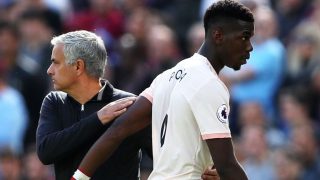 Manchester United slumped to a dismal, diabolical defeat at the London Stadium to register their worst start to a league season in 29 years. The result inflicted more misery on Mourinho and will have done little to quell the growing feeling of doom and gloom. You feel Mourinho is getting let down by his players, with no heart, guts or effort on display.

As such, no player gets a rating above 6, which in itself feels slightly generous. Without further ado, here are the ratings:

The Spaniard was pretty helpless in all of the West Ham goals – a close-range flick, a looping own goal and a one on one.

For such an experienced international, his delivery from set pieces and open play was atrocious. Every time he took a corner, West Ham looked likely to score, which in itself is ridiculous. He was ran ragged by Felipe Anderson.

A panicky and error struck display from the Swede, even with the fluke of the own goal. Lindelof has struggled to gets to grips with the standards set at United and the pressure seems to be telling.

Despite excelling against the physical Troy Deeney, Smalling has always struggled against pace and Marko Arnautovic has both in his locker. It always stuck with Arnautovic and Smalling did not stamp any authority on his man.

Arguably United’s most threatening attacking outlet down the left and one of the only few with the heart to go to the away end at full time. Assisted Rashford’s goal.

A surprise inclusion but he was not one of the worst out there. It’s clear he’s not a centre-back but his passing was tidy and brought a rare gasp from the United fans with his long range drive in the second half.

The Serb often slowed down proceedings and was outplayed and outfought by Mark Noble.

United looked their most dangerous when Fellaini attacked the ball in the opposition box. Moyes much? Even so, United did not make the most of Fellaini’s unique threat when they were chasing the game.

For all the pre-game build-up about how Pogba is getting a rough time from Mourinho, he did nothing to suggest that he is getting unfairly treated. He strolled around like his usual entitled self, lost the ball with unnecessary skill in his own half and was a major reason why United lost the midfield battle. Substituted to cheers from the home fans and barely any reaction from the away end.

Largely poor after looking lively against Derby, United didn’t do enough to expose him against Pablo Zabaleta and was immediately hauled off after skinning Zabaleta for the one and only time.

Did nothing to back up a historically impressive scoring record against West Ham besides a first half header which hit the outside of the post.

Replaced Lindelof in an attacking substitution and was a rare bright spark. Took the attack to West Ham and scored a lovely backheeled flick.

No real time to make an impact but was sloppy in possession with some poor giveaways,