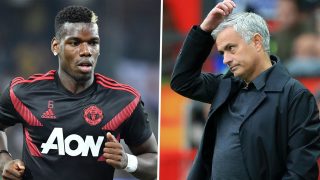 Former Manchester United captain Steve Bruce insists that the club must back Jose Mourinho over Paul Pogba to avoid ‘anarchy’ behind the scenes.

Though it must be suggested that this is already the case and that Pogba has received the confidence from other teammates to speak out against his manager as he’s done time and time again since winning the World Cup this past summer with France.

READ MORE: If I had a choice between retaining Jose Mourinho and appointing Brett Kavanaugh

There can be no doubt about Pogba returning from his summer achievement with a chip on his shoulder, but the Frenchman still has a lot to prove at club level. The pinnacle of football nowadays, whether he realises it or not, is the Champions League – though we’re taking nothing from his World Cup triumph, international football is just not what it used to be…

Mourinho’s men are currently nine points behind Manchester City at the top of the table and look like a fading force under the Portuguese tactician’s stewardship… or lack of!

However, Bruce is adamant that the 55-year-old should not be undermined in his dispute with Pogba, insisting that player power can tear a club apart from the inside.

“I worked under the master, Sir Alex Ferguson,” said Bruce, as per the Daily Mail. “He had that respect. As ­players, we didn’t always like it – but we respected him.

“If that relationship doesn’t exist anymore, well, the lunatics will be running the asylum.

“It becomes a ­free-for-all. One person has to be ­accountable because, if that’s not the case, I can guarantee that the club – and that’s any club, not just ­Manchester United – will have ­problems. It could be anarchy.”

Next up for United is their Champions League clash against Valencia on Tuesday. Then it’s Newcastle. Both games are must win for Mourinho and he will need his players to be at their very best to pick up maximum points.

There cannot be excuses made if the Reds fail to achieve that.