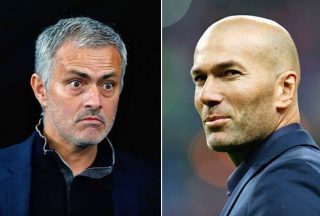 Jose Mourinho has been in Zinedine Zidane’s shoes – but now finds himself following in Louis van Gaal’s footsteps.

It wasn’t too long ago that Mourinho’s shadow loomed large over Old Trafford as Van Gaal’s United reign lurched from one crisis to another.

READ MORE: Jose Mourinho is a winner but his time is up / If I had a choice between retaining Jose Mourinho and appointing Brett Kavanaugh

Now the Portuguese manager finds himself trying to arrest his team’s alarming slide amid the spectre of Zidane.
It is an all-too-familiar pattern – and the longer the former Real Madrid coach remains out of work, the greater the scrutiny will be on Mourinho.
It took a matter of minutes for rumours to emerge of clandestine meetings with Zidane after United’s latest slump at the London Stadium.

That the Frenchman had visited the UK in the week only served to fuel the speculation. And while senior United sources were quick to dismiss the stories as ‘nonsense’, it would be naive to think the links will end there.

If anything, they will only intensify and Zidane’s silence will be deafening. Just as Mourinho’s was as Van Gaal entered the excruciating final stretch of his United tenure.

Mourinho was the obvious candidate to replace his former Barcelona mentor and everyone knew it.

Out of work and determined to prove Chelsea wrong for showing him the door just months after winning his third title at Stamford Bridge, there was an inevitability about him succeeding Van Gaal – even when United themselves weren’t certain.

It was far from a foregone conclusion – no matter the noise surrounding the drawn-out affair.

Had Van Gaal delivered Champions League football – something that remained a possibility until the final day of the season – and won the FA Cup, it would have been close to impossible for Ed Woodward to justify sacking the Dutchman.

As it was, defeat in the penultimate game of the season – coincidentally against West Ham – sealed his fate.

By the time he led United to their first piece of major silverware post-Sir Alex Ferguson at Wembley, word of Mourinho’s arrival was out.

It was cruel on Van Gaal, whose moment of glory was soured, and the nature of his humiliation did not sit well with everyone within the club.

But he ultimately suffered the same fate as his predecessor David Moyes for failing to secure the minimum requirement of Champions League football.

The expectation is that Mourinho will be judged by the same standards – all the time with Zidane breathing down his neck.

That the 46-year-old boasts a perfect Champions League record of three straight successes in club football’s premier competition only adds to the mounting pressure on Mourinho’s shoulders.

As former United defender Rio Ferdinand told BT Sport: “There will be conversations at the top level about the future of the manager and the squad.

“You can’t let a situation like this continue throughout the season – wars in the press, leaks, players on one side of the dressing room, Mourinho and his staff on the other. If that continues this will be one of the worst seasons in the club’s history.”

Woodward has already offered his public backing to Mourinho – but Van Gaal, and Moyes before him, know how quickly that can change.

In December 2015 – when Mourinho became a free agent and Pep Guardiola was finalising his move to Manchester City – Woodward was preparing a contract extension for Van Gaal.

By May, the former Ajax, Barcelona and Bayern Munich manager was gone.

Zidane ticks numerous boxes for Woodward. He is a marquee name to appeal to investors on the New York Stock Exchange, as well as potential targets.

At Real, he proved a master at harnessing a dressing room full of egos – leading them to unprecedented success. And, crucially, he has proved himself the only coach capable of overshadowing even Guardiola’s achievements.

That he is one of Paul Pogba’s idols is an added bonus.

The fear for Woodward is that he won’t be a free agent forever. The last time United’s executive vice-chairman was faced with a similar dilemma, Mourinho was handed the keys to Old Trafford.