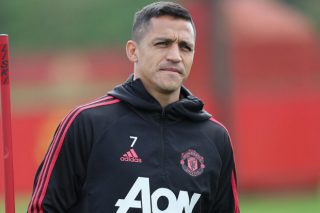 Manchester United are reportedly set to sell Alexis Sanchez just months after signing him in from Premier League rivals Arsenal.

The Chile international joined the club from the Gunners in January and it looks like he could be on his way out of Old Trafford already.

In our editorial two weeks ago, a call was made for extra patience with Sanchez but after being dropped for our defeat against West Ham, it looks like Mourinho is set to give up on the attacker.

However, there is a chance Sanchez will outlast Mourinho at United, with the boss under intense pressure to keep his job.

The Daily Star suggest that the Reds are open to offload the former Arsenal star.

Sanchez has failed to hit the ground running at United since joining some months ago, so it wouldn’t be much of a surprise if the club did want to get rid.

The 29-year-old has yet to score this season and in his 23 appearances for United, he’s only managed to score three times. A woeful record for a player of his quality.

Sanchez being dropped from United’s squad after travelling to London at the weekend would have come as a major blow to the player.

Caught Offside are of the view United would be better off cutting their losses and binning Sanchez, as players like Anthony Martial and Marcus Rashford are more than capable of replacing him in the starting line-up.

Alexis Sanchez’s gets paid nearly £400k a week and his greatest accomplishment is playing the piano. One of the worst signings in PL history.