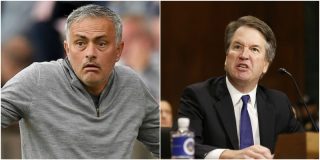 Full disclosure: I wasn’t able to watch Manchester United’s 1-3 defeat to West Ham due to a previous commitment. Some might say I’m lucky. I don’t feel too fortunate.

The 8am Saturday meeting [wtf?] went well despite its timing. Afterwards, I walked a few blocks to the library to log on. The morning offered that special South Florida weather. The sun beat on my back, the rain in my face. Foreshadowing.

I switched to my Twitter feed. The long line of tweets was initially dominated by two multi-tweet posts. Daily Mail writer Adam Crafton laid out his thoughts on the United situation. Political pundit Sally Kohn recounted an interview she did regarding Supreme Court nominee Brett Kavanaugh.

If you don’t follow American politics, Kavanaugh’s a partisan choice for the country’s highest court who’s been accused of attempted rape at a high school party 36 years ago. The accusation was brought at the last minute because the [credible] complainant was reluctant to come forward but the [not so credible] Democrats were desperate to derail the lifetime appointment. I mention Kohn’s thread because the details parallel the Mourinho debate remarkably.

In both cases, outside parties were mentioned as bearing responsibility for the mess. Democratic Senator Diane Feinstein sat on the information for two or three months. Paul Pogba posted his good times on Instagram [allegedly] while United was losing. Senator Bob Graham grandstanded during the subsequent hearing, razing Dems for putting Kavanaugh’s family through hell by asking perverse questions [conveniently forgetting Kavanaugh was the counsel who advocated grilling President Bill Clinton regarding every salacious detail regarding his–ahem–tête a tête with Monica Lewinsky]. Liverpool legend Jamie Carragher had Mourinho’s back. Between repeated admissions that he likes beer, Kavanaugh ripped Democratic senators himself, accusing them of participating in a multi-million dollar conspiracy to derail his nomination. Mourinho attacked reporters following a previous defeat, reminding them he’s won more Premier League titles [three] than all other active managers combined [Guardiola, Pellegrini, one apiece]. I think the Portuguese prefers wine although he didn’t say.

Also in both cases, invisible billionaires operate behind the scenes. The Koch brothers finance the conservative agenda. The Glazers own Manchester United. Neither family speaks in public. To be fair to the Kochs, they at least pony up their own money whereas the Glazers leverage their grip on United.

In the end, each thread reaches a similar conclusion. Irrespective of third-party responsibility, neither Kavanaugh nor Mourinho’s suited for the job. Both are blatantly, shamelessly dishonest, willing to say anything to divert questions regarding their personal lust for power. To be fair to Mourinho, he was far more qualified to be appointed United manager than Kavanaugh was for the Supreme Court before these allegations. The difference, of course, is that the seat at Old Trafford’s no longer a lifetime gig.

[Full disclosure II: The Cristiano Ronaldo story in Der Spiegel came out after I wrote this. He may seem a more apt comparison to Kavanaugh in that new light. He isn’t. This argument has nothing to do with sexual behaviour other than as a single issue among many for which Kavanaugh denies responsibility.]