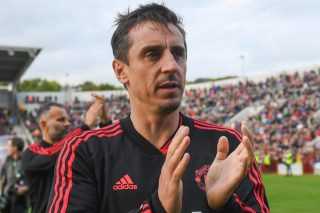 The Reds succumbed to their third Premier League defeat of the season on Saturday, losing to West Ham at the London Stadium.

It was another lacklustre performance from Jose Mourinho’s men which leaves us nine points behind Manchester City at the top of the table after just seven games.

The Portuguese boss is now under intense pressure with many pundits and supporters suggesting that his time has run out at Old Trafford, perhaps predictably in his third season at the club.

Fergie retired in 2013 after years of immense success, but since then we’ve failed to match those remarkable heights. David Moyes, Louis van Gaal and now Mourinho have all been in the hot seat since.

According to Neville, the managerial merry-go-round is the main reason for the club’s misfortune over the last five years, as he stated on Twitter.

This mess started when United sacked David Moyes after 8 months and we lost all sense of the values that the club had been built on for 100 years . It’s not the manager it’s the lack of football leadership above him. They are bouncing all over the place with no plan!

His comments will back what many supporters feel this morning in the wake of another woeful display.

However, I would go back further to when the decision was made to appoint Moyes. He had done nothing to deserve the biggest job in football, replacing the best manager of all-time at the world’s biggest club.

Our Premier League campaign is already a washout and top four will be a real challenge. The hope now is for a good run in the Champions League and to win the FA Cup.

Mourinho’s position should be even clearer in a week’s time.