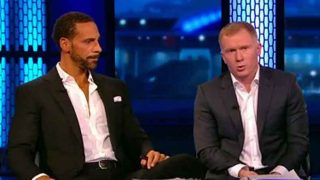 Jose Mourinho’s future at Manchester United is under threat after a shock 3-1 defeat at West Ham, according to club legend Rio Ferdinand.

The drama at Old Trafford does not help and we’re certainly in crisis mode after equalling our worst start to a Premier League season with just 10 points from their opening seven matches.

He record matches that of United four years ago under David Moyes. Embarrassing.

Today saw the Reds suffer their third bad result in a week: 1-1 vs Wolves, losing on penalties against Derby County and now a 3-1 loss against West Ham.

Following the result, Ferdinand told BT Sport: “As a footballer, your DNA is about hard work and effort. I didn’t see that today.

Referencing executive vice-chairman Ed Woodward, Mourinho and the players, Ferdinand added: “There are some big decisions to be made at Manchester United. At the moment there doesn’t seem to be that togetherness.

Ferdinand’s former United team-mate Scholes said the players had to be held accountable, adding: “I wonder if the quality is there as well. Are these players really good enough. They’re not really showing that they are.”

Think this should be the end for Mourinho at United. Clear it has got so poisonous to the point of no return. The team selection was ridiculous and you can tell the players aren't there for the manager. Should just make the change this week.