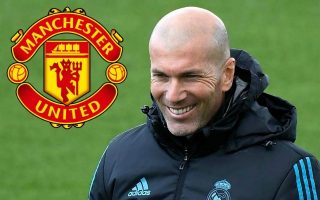 Jose Mourinho is under severe pressure after a poor start to his third season in charge, with the Reds losing against Brighton and Tottenham, drawing at home to Wolves and also exiting the League Cup to Championship outfit Derby County.

While there are plenty of mixed reports doing the rounds at the moment, some suggesting Mourinho may be safe for now, Caught Offside claim sources close to Zidane believe he will be offered the United job soon.

Moreover, The Sun reports that the Frenchman is learning English to prepare himself for the role at Old Trafford, should a vacancy open anytime soon.

Calciomercato also ran a piece on Zidane’s whereabouts during the week, supposedly in London.

That would suggest that the 46-year-old is eager to get the United job.

He was a big success at Real Madrid, as a player as well as a manager, winning three consecutive Champions League titles and La Liga in less than three full seasons in charge.

The United job would no doubt be a bigger challenge for Zidane, but fans would surely welcome his offensive approach on the pitch in comparison to Mourinho’s conservative ways.