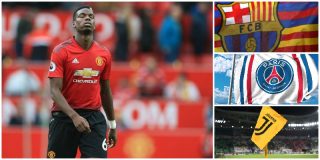 Something has to give in this Mourinho-Pogba feud, which is threatening to derail United’s season. Either, they settle their differences or one will not be associated with United any longer. As it’s easier to sell a player then sack a manager, any money on Pogba leaving United can be seen as smart.

Stretty News has it on good authority that Pogba’s parties’ attempts to engineer an exit are in keeping with a three-year plan for Pogba at United before securing a move abroad once more.

For argument’s sake, let’s say Pogba is made available for transfer in January, as nothing else can be done in the meantime other than working something out, we assess which sharks would be circling and where Pogba might end up.

Could a return to former club Juventus be on the cards? The Old Lady’s approach of sell big and buy prudently was shelved when they, I mean Fiat, made the marquee signing of Cristiano Ronaldo. Has arguably the world’s best player set the tone for more big-name arrivals? Antonio Conte and Max Allegri managed to get a happy tune out of Pogba in his time in the black and white, which brought them a huge profit on the Frenchman by the time he was coming back to Manchester. Whether Juventus have the financial clout to target Pogba again remains to be seen.

Paris Saint-Germain have hit the big time in recent years with their influx of money and huge spending on the likes of Neymar and Kylian Mbappe and Pogba is a Parisian at heart. PSG have lingering concerns that Adrien Rabiot will not sign a new deal so there could be room for another midfielder should they sell Rabiot in the winter. Again, much will depend on whether the French champions have the finances to fund the Pogba package. Their best chance could well be to wait until next summer for a potential Neymar exit and drop in Pogba’s valuation.

There have been more than a few whispers that Spanish champions Barcelona are weighing up a move for Pogba, with Luis Suarez, in particular, being very vocal in his approval. It begs the question, why would Barca go for Pogba? Having had the disciplined, tactical experts of Xavi, Busquets and Rakitic in recent years, Pogba, without doubt, goes against that grain. How strong their interest actually is is up for debate too.

Without categorically stating where Pogba will end up, including outlasting Mourinho at United, none of these teams can be ruled out as potential destinations.

This saga will roll on.