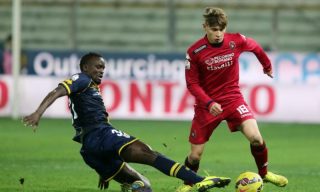 Transfers can be a touchy subject where Manchester United are involved. Following a summer where accusations of a lack of backing was shown in the pursuit of a new centre-back, it seems silly season is already coming right back around with a fresh transfer rumour hot off the press.

According to Caught Offside, United have joined a whole host of clubs in an attempt to sign 21-year-old Cagliari midfielder Nicolo Barella.

The young Italian has caught the attention of the likes of Liverpool, Inter Milan, Chelsea and Everton with a string of impressive showings in last season’s Serie A campaign. With 6 goals in 35 games and an energetic style of play, there are solid foundations on which to build a positive platform for the young man. With a reported asking price of €40m, he wouldn’t seem to be an expensive outlay if United were to act on their interest, and as Cagliari aren’t in any European competitions he would be immediately available in all areas.

Combative and tenacious, Barella plays in the heart of the midfield, but can operate both further forward and as a shield for the back 4. 14 yellow cards and 1 sending off in the 2017/18 season shows just how combative he can be (if perhaps not always for the better), but a goal already in the 7 games he has played so far this season highlight the further threat he poses to the opposition.

With the likes of Nemanja Matic, who isn’t getting any younger, Ander Herrera, a peripheral figure the past 2 seasons under the current regime, and Fred, still finding his feet in English football, the addition of Barella would be seen as a shrewd one. His versatility would be an excellent arsenal to call upon, and his energy a refreshing sight for fans who have been subjected to lacklustre showings of late.

It seems as though the competition is very stiff for his signature, and beating off the interest from clubs like Liverpool and the Milan clubs would be no mean feat, but with the only doubts being discipline-based and a relatively small price tag, it may just be seen as well worth the hassle for one of the hottest talents Italy has to offer.