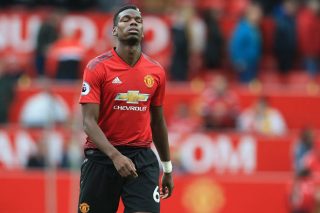 With all that has been going on with Pogba and Mourinho this week, some have lost sight have United are actually back in league action, as early as Saturday lunchtime.

United head to the London Stadium, where a rejuvenated West Ham most recently put eight past League 2 Macclesfield, in what appears to be a crunch game for the reds.

The spotlight is very much on how United respond to a turbulent week, or whether it will, in fact, get worse. There are so many questions to address- what United will turn up, will Pogba play, can United prove the doubters wrong? Time will tell.

Without further ado, here is how I think United will take to the field at West Ham, in a 4-3-3 formation.

David De Gea – After Sergio Romero’s nightmare comeback in midweek, there is only one choice between the sticks, the undisputed number 1.

Antonio Valencia – As much as I’d like to see the impressive Diogo Dalot given an extended run in the side, Valencia will surely be recalled after a rest midweek and all the hoo-ha of Pogba losing the vice captaincy. Mourinho’s captain.

Chris Smalling – Smalling has been steady and a sure presence in recent weeks and deserves to keep his place.

Victor Lindelof – The Swede appears to hold the other centre-back position presently. Jones and Bailly featured versus Derby and hardly pulled up trees.

Luke Shaw – United’s player of the season to date and a rare attacking outlet. The Englishman is flying and one of the first names on the teamsheet. He’s shown the right attitude to Mourinho’s tough love.

Nemanja Matic – The Serb got over his suspension following his red card at Watford and is a virtual automatic selection.

Fred – The Brazilian will be confident after opening his account against Wolves and his bustle and vision will be crucial in place of the predicted dropped Pogba. Mourinho might just make that big call to show who’s boss.

Marouane Fellaini – Another Mourinho disciple who has excelled in recent away performances. The afro is so useful in both boxes and his late cameo against Derby sparked United into getting his last gasp equaliser.

Marcus Rashford – The Derby loss in midweek signalled the end of Rashford’s domestic ban and will be chomping at the bit to get his season going in the right direction.

Romelu Lukaku – Guilty of missing great chances against Derby, but Lukaku is still United’s premier striker. Having notched in away games at Burnley and Watford, I am backing Rom to get back on the score sheet.

Alexis Sanchez – Try as he might, it’s not happening for Sanchez but I reckon Mourinho will keep persevering with him. Anthony Martial and Juan Mata delivered in flashes against Derby but I wouldn’t be surprised to see Sanchez recalled.