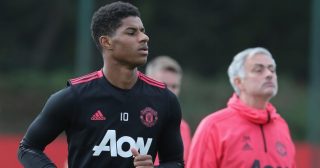 It’s been one of those weeks at Manchester United. A disappointing result against newly promoted Wolves, early exit from the Carabao Cup at the hands of Derby County and then that video which served only to deepen the hole the United manager Jose Mourinho seems to find himself in. The reported rift between himself and Paul Pogba finally made public, and a division within the club that is extending further now, in to the terraces. Surely it stops soon? Perhaps not.

Reports surfacing late last night from Chris Wheeler at the Daily Mail report that Mourinho has blasted Marcus Rashford for having a “poor attitude” in the wake of last weeks Champions League tie against Young Boys, apparently reminding the 20-year-old he isn’t too important to listen to what he’s asked to do.

Rashford has allegedly highlighted concerns following England’s run to the World Cup semi-final that perhaps it is going to his head by refusing a proper warm down prior to his below-par performance in Bern, and this was addressed by the manager in a recent team meeting. Seeming to be part of a crusade by the Portuguese manager to crack down on his stars and close the chasm that is beginning to split his squad apart.

It is believed that Rashford is on the periphery of a group close to former vice-captain Pogba that includes Andreas Pereira and Anthony Martial, and with a strained relationship with the ‘ring leader’ it is is obvious why Mourinho would want to distance one of his brightest talents from falling into bad ways.

Doubts have surfaced about the young strikers ability to cope with the exposure of the fame and fortune playing for Manchester United brings. Exploding on to the scene as he did, and the expectations he carries on his young shoulders, is bound to have an effect on the mental state of someone so young and it can certainly be seen as a positive step for Mourinho to be looking to crack down on any lapses and hammer home just how important it is to follow instructions from coaches and keep his nose out of any trouble. It is also vital that the manager begins to get a stranglehold on a situation that could become a fatal one for him should he fail to.

Rashford wasn’t the only star Mourinho was gunning for mind. Paul Pogba fell in for some more private criticism over his leadership skills, and was summoned for a meeting with Mourinho on Tuesday morning to discuss the issues. It would be sensible to assume that this is where the midfielder was informed he would no longer be the vice-captain of the side.

With Rashford available once more against West Ham this weekend, and the pressure for improvement now close to bubbling over, there couldn’t be a more perfect time for the player to step forwards and show his commitment to making something of himself at the club he has supported his whole life. And with Mourinho being proactive in nipping any potential issues in the bud, the opportunity for the recent soap opera to end may look somewhat more optimistic in the coming weeks.