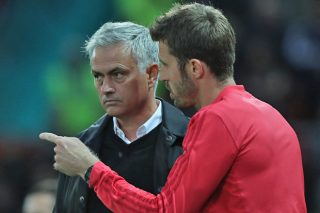 It might not be happening within this week or in the next month, but it will happen sooner rather than later. Jose Mourinho will not be the Manchester United next season and it is a truth that many have now accepted, with the Portuguese’s time of the essence at Old Trafford.

The recent spat involving Paul Pogba and Mourinho has made it all the more clear to everyone that someone will leave the club soon, it will either be Jose or Pogba and maybe even both of them. Considering that this situation has come to a point where both the parties can’t really tolerate the sight of the other, someone will leave and it could be Jose.

Even if Jose doesn’t leave before Pogba does, things don’t seem bright at all for him. The relationship he has with the United board is frosty and he’s already spoken against them a lot of times. In response to that, the Glazers won’t really take too much time in axing the former Chelsea boss as soon as things start to go very wrong.

Once that happens, the Red Devils will be on the hunt for their fifth manager in just as many years. Here are 5 managers who can succeed Jose Mourinho at Manchester United.

The reason why the Argentine ranks so low in the list is that of his current commitments to Spurs and he is very unlikely to leave a promising project that he’s building in the North of London, with the new stadium coming in.

If he wasn’t committed to Spurs though, Pochettino would have been first in the list. After all, he is all United are crying out for. He’s young, dynamic and preaches a way of football that has made Tottenham one of the most entertaining sides to watch in Europe. He places a lot of emphasis on developing young players and above all, improves all the players in the side to a large extent.

After years of having resigned to having managers who have hardly brought to the plate football that lifts you off your seats, United would want to emerge out of that and get someone who brings to the table a very attractive brand of football and is really liked by the media for the kind of a person he is.

Considering the fact that United will again be stuck in a period of transition once Jose leaves, no one will build the club better than Pochettino. People can go on and on about how he hasn’t won a trophy at Spurs, but the Lilywhites work under a tight budget and despite that, Pochettino has made Spurs the best side in England over the last three seasons, along with Manchester City.

If Monaco are a very good side right now, it’s because of two reasons. One is obviously the money that they have from their owner Dmitry Rybolovlev, but the second is because of the management of Leonardo Jardim.

One curious thing about Jardim is that the Monaco side struggled under him when Rybolovlev had taken over reins initially largely because the side had spent big that summer. Once Monaco cut down on spending in the transfer windows, Jardim began applying his magic and that resulted in the Les Monegasques reaching the semi-final of the UEFA Champions League in the 2015-16 season.

Its a clear indication of the fact that Jardim knows how to blossom players and he knows how to get the best out of them. Be it Bernardo Silva, Tiemoue Bakayoko, Benjamin Mendy, Thomas Lemar or Kylian Mbappe, Jardim’s abilities to nurture youngsters and preferring them over the more hyped, superstar players is well-documented. And the 4-4-2 formation that he famously plays is very attack-minded; relies on pressing, swift movement and playing attractive football.

One thing that would let Jardim down is his proven inability to manage things when the spending has been optimum. And a Manchester United manager should know how to deal with the pressures of making big signings.

Many have long forgotten how good a manager Laurent Blanc can be, largely because he failed to do anything of note at Paris Saint-Germain. He did win the Ligue 1 with the Parisien outfit but failed to reach where the club’s owners want the club to be – win the Champions League.

Blanc proved himself to be a very manager during his stint as the Bordeaux boss when he won the Ligue 1 and also topped their Champions League group that consisted of Bayern Munich and Juventus in the 2009-10 season. Not just that, but Blanc was also awarded the Manager of the Year award in 2008.

Blanc’s teams like to dominate possession and impose themselves on the game, but it is Blanc’s man management skills that stand out. The manner in which he treated Zlatan Ibrahimovic at PSG has drawn comparisons to how Alex Ferguson treated Eric Cantona back in the 1990s and Blanc had been very firm with any troubles that Serge Aurier caused- a sign that the Frenchman knows how to manage personalities.

One thing though, that lets him down is how he failed to come close to winning the Champions League at PSG, despite having had everything at his disposal. Perhaps, that will always remain one blot on his managerial career.

Rumors have already been strife, linking Zidane to United. And they took a momentous hit of augmentation when Zidane was spotted near United’s offices in London when he had been at the FIFA Awards in London two days earlier.

Fans have been going on about how Zidane would not fit in at United because he’s managed a side full of stars at Real Madrid and it is because of those stars that the Los Blancos won the UEFA Champions League thrice. They tend to forget that what United currently have is a team of stars and although, the stature of players that are United isn’t as lofty as how the players were at Real, but if Zidane managed those stars at the Bernabeu so excellently, doing the same with United players won’t be too big an ask.

The second criticism about Zidane roots from the logic that he had already an excellent team to win things and he had to change little to do the same. But if you look at the number of times Real Madrid had to be tactically flexible when they were under Zidane shows how flexible Zidane can be while laying down his pragmatic system in place.

It would be fair to say that Real under Zidane looked unbeatable in knockout games. The way they managed games is how Jose would dream of managing games at United and excelling in the Champions League. And it is never drab. Despite defending deep and digging out games, Real never played football that was boring.

And remember, before having joined Real as the boss, Zidane had managed the Castilla side too.

After having had managers who have no idea about the Manchester United culture, it is probably finally time for the Glazers to bring in someone who has given everything to the club over the past few years and has played every game as if it were his last. And few out there know United more than Carrick does.

The current assistant knows everything about what the club needs. As things stand, he seems to be Jose’s only connection with the United culture. He is always there by his side, representing what United are and have been when things that go against the culture have been happening under Jose. He knows what issues United are being troubled by and being a fan-favourite, he knows how imposing the traditional United values will change things.

He may be inexperienced but once Jose goes, United will be stuck in a period of transition once again. Apart from a top centre-back and a top right winger, United have a top-class side, capable enough of challenging for the title if the playing style and system is sorted. The attacking philosophy that United boasted of under Sir Alex can only be recovered if someone who has played under him takes over the reins from Jose.

And being a figure who knows the club more than any other player at the club, Carrick would be a regarded figure in the dressing room. The players would know that if they do what he wants them to do, they would go on the right track at Manchester United because Carrick knows what the club has been about.

The money-making business that United have become though, it would be slightly tough for the Glazers to appoint Carrick as the manager. It wouldn’t be as marketable a decision as bringing in Zidane or Blanc, but could well be crucial in bringing back the values that the club is crying out for.