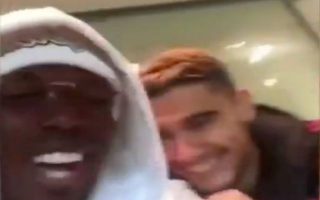 After an improved clip was shared of the tense clash between Jose Mourinho and Paul Pogba at training on Wednesday, the reason behind it all was revealed to the press for the Thursday newspapers.

Neil Custis from The Sun reveals that Mourinho was made aware of a social media post that showed Pogba and teammates Andreas Pereira laughing in the stands at Old Trafford on Tuesday night.

The post went out at 10.28, suggesting it had come after the game, but it had actually been filmed in the first half of United’s League Cup match with Derby County.

Old Trafford’s notoriously bad Wi-Fi has been blamed for the post going out later.

United were leading 1-0 but Derby came back to win on penalties following a 2-2 draw.

Prior to this explanation which made it The Sun’s back page, there were further question marks being raised over how long the 25-year-old will remain at Old Trafford.

However, this doesn’t change a thing. Stretty News has it on good authority that Pogba’s plan was only to stay at United for three-years before being promised another move abroad by his agent Mino Raiola.

This whole Jose vs Pogba thing is because of this video. Jose things he posted the video after the game.

Pogba: “Why would i post it after? Why would i laugh when we lose” pic.twitter.com/IPusrwCdJc

Perhaps the manager will inflict a certain ban on social media from his players when it is causing misunderstandings like this in the public eye. It’s all very embarrassing.