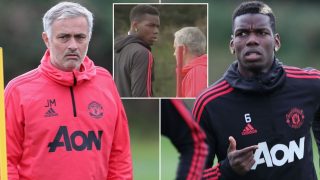 In the early hours of Thursday morning, I appeared on talkSPORT on behalf of Stretty News to offer some input on the showdown between Manchester United manager Jose Mourinho and Paul Pogba.

The station has generously sent over an audio file of the brief segment for Stretty News to share.

We just wanted to talk about football and Manchester United, but these are the headlines and they shouldn’t go ignored. This situation is getting in the way of what matters most. And, that’s the club.

United are struggling for results and there is no doubt that Mourinho and Pogba share some of the blame. Neither individual is handling the situation well and it’s acting as another grey cloud over the club.

Anyhow, listen below and let us know what you think.