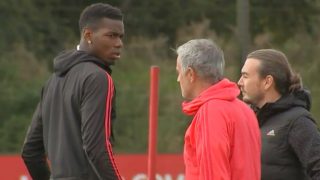 So, here we are again. A feud between Jose Mourinho and his best-attacking player. The difference this time? It is not a rumour. There’s video evidence.

If you’re a Manchester United fan and haven’t seen it, you’re either Stevie Wonder or on a carpet. But just in case one or the other applies, here’s a quick recap.

During Manchester United’s League Cup match with Frank Lampard’s irrepressible Derby County, presumably while the Red Devils still held their 1-0 advantage, Paul Pogba, Andreas Pereira and Luke Shaw watched from the Frenchman’s Old Trafford box. Pogba slyly captured Shaw texting. The left-back flashed the horns when he realised he was caught, the others laughing at him.

Pogba left the box at the 89-minute mark. It isn’t clear when he posted the video on Instagram, as per The Sun.

The following morning at training, Sky Sport had permission to film. With the cameras on and the manager aware, Pogba trotted onto the pitch, greeting everyone. Jose Mourinho spurned his handshake. A shocked Pogba listened as Mourinho said something microphones did not catch. An exchange ensued. At one point, Mourinho called over United’s social media manager.

At first, the poor audio seemed to indicate Mourinho had told Pogba to “get out” and asked someone to “take him home.” However, an intrepid Reddit user, non-relevant, worked his significant technical skills on the soundtrack, producing a more audible recording.

It turns out Mourinho was upset about the Instagram post going live after United had lost in embarrassing fashion. Pogba denied he had posted it after the club had gone down to defeat.

Speculation on non-relevant’s thread noted how poor the wifi signal is in Old Trafford. Is it possible Pogba posted the banter before Derby had levelled but it became trapped in a buffer until he left the stadium, then went live?

The manager elected to think the worst. His confrontational style and paranoia are well documented. The argument took place in the camera’s full view. Mourinho knew Sky were filming. The internet exploded.

Naturally, many wondered what all the fuss was over a harmless Instagram Post. FC Mourinho found every reason to attack the player:

Mourinho’s culpable for two reasons. First, he knew Sky were on the scene and chose that moment to confront Pogba rather than in private. Second, watch the Instagram post.

This whole Jose vs Pogba thing is because of this video. Jose things he posted the video after the game.

Pogba: "Why would i post it after? Why would i laugh when we lose" pic.twitter.com/IPusrwCdJc

If you’re Manchester United’s social media manager, public relations boss or manager, where’s the problem? Here are three players who haven’t been named to the squad. They’re watching the match when they could be elsewhere, laughing, joking, enjoying themselves with the club winning at the time. Who says the squad isn’t united?

Instead, the boss has initiated a needless confrontation, picked a fight with his most skilled player, tried to humiliate him before the team. This isn’t about anyone thinking they’re bigger than the club. It’s about Jose Mourinho’s personal fear someone might be bigger than him.

The fans should not stand for it. Nor should the club.