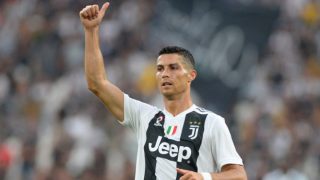 Ronaldo was sent off for the first time in the Champions League for pulling the hair of Valencia defender Jeison Murillo, which referee Felix Brych deemed worthy of a red card after consulting his assistant behind the goal.

UEFA have ruled Ronaldo must only serve a one-game ban, meaning he will miss their home encounter against Swiss side Young Boys, who United convincingly beat in their opening game.

UEFA’s punishments for a red card for violent conduct are unlike Premier League jurisdiction, which warrants an automatic three-game ban, most recently served by Marcus Rashford after clashing heads with Phil Bardsley in United’s victory over Burnley at Turf Moor. UEFA judges incidents on a case-by-case basis.

A harsher punishment would have meant Ronaldo missing both encounters against his former employers, which perhaps explained why he left the Mestalla pitch in tears following his dismissal.

For the nostalgics among us, it will be great for Ronaldo to grace the Old Trafford pitch again.

That is tinged with the reality that he could feasibly repeat the feats of his last visit, where he equalised in THAT match against Real Madrid and United went on to lose that match.

If the subplot surrounding the much talked about Paul Pogba playing against his old team wasn’t enough, Ronaldo was almost destined to have as equal a say.