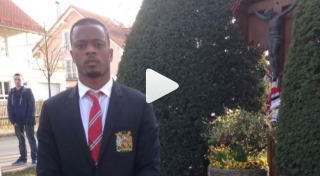 Patrice Evra will forever hold a dear place in the hearts of many a United fan. From standing up to Luis Suarez in the race row, gnawing a fake arm and roaring in front of the Stretford End to giving United fans the best minute of the Moyes era in Munich, there were unbelievable moments.

More importantly, he ‘got’ the club, its history, traditions, expectations and has not been shy to show it even though his ties with United ended in 2014.

In case you were missing hearing about a feud between Mourinho and Pogba, here is another reminder- the two are not currently seeing eye to eye and haven’t for some time.

So Evra has timed his latest Instagram post to perfection where, once more, he has underlined his love for United and has sent out a rather blunt, damning message:

‘If you don’t know or respect the history of your club, no matter who you are, you will never be FOREVRA RED’.

If you don’t know or respect the history of your club no matter who you are… you will never be FOREVRA RED !!! @manchesterunited #ilovethisgame #positive4evra #busbybabes #manchester #history #respect #love #munichdisaster #united #god

In other words, grow up Paul Pogba and show some bloody respect and get on with your job. Cut the crap and remember how lucky you are to play for United, a club whose traditions and culture will have been drummed into him in the academy.

It is no secret that Evra and Pogba have remained close buddies since their United and Juventus days. The pair were videoed at a restaurant in Manchester recently so there will no doubt be a dialogue between them about work and life.

Pogba could do with taking a long, hard look at his fellow Frenchman and how he has earned legendary status at United. He could do a hell of a lot worse.

It draws parallels with Wayne Rooney and Sir Alex Ferguson in 2011, when Rooney outwardly questioned where the club’s ambitions lay. Pogba has similarly been open in his feelings, only this matter has not been sorted behind closed doors. Evra was privy to those goings on so will know how a situation can be resolved.

Perhaps a quiet word in Pogba’s ear when they’re next dining at Tattu will not go amiss.

Evra’s message should not solely be aimed at Pogba, but all the playing staff:

Remember what you’re paid to do and your duty, play for the badge and remember it’s a privilege.