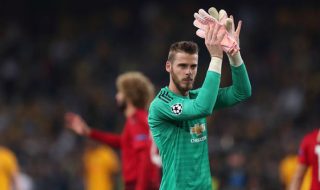 Amongst the turmoil and uncertainty surrounding the club, only one player has consistently been our best player.

Under David Moyes, Louis Van Gaal and Jose Mourinho, De Gea has been the stand out performer.

For three consecutive seasons, he won the Sir Matt Busby Player of The Year award and deservedly so.

He was asked about a new contract during the press conference for the Young Boys Champions League fixture last week.

De Gea said: “I feel real love for this club, the fans. I’m really happy. It’s one of the best clubs in the world so it’s really good to be part of this club.”

With United paying astronomical wages for Alexis Sanchez and Paul Pogba, two players who have yet to justify their lofty earnings, is it time Big Dave was brought in line with the big earners?

He is already well paid I’m sure but let’s look at the increase in transfer fees for Goalkeepers in the last year.

City paid £35million last summer for Ederson, Allison went to Liverpool for a reported £56 million rising to £66 million and then Chelsea broke the record fee, £70 million, for Kepa Arrizabalaga this summer.

How much is David De Gea worth in today’s market? On top of that, if he was sold, how much would a replacement cost and where would you find a better player?

Real Madrid seem to have given up their persistent chase by signing Thibaut Courtois so moving to Spain for now seems unlikely.

The logical step now would be to make him captain. Tony Valencia has been a good servant to the club but it’s now time to give someone with real quality, leads by example with consistency and high standards.

De Gea’s transformation since his move from Atlético Madrid for £19 million has been meteoric. A skinny, athletic bag of bones when he started his time at Old Trafford to a filled out, athletic and honed technically gifted shot-stopper.

He defied a very shaky start and often was rotated with Anders Lindegaard.

De Gea showed determination, mental strength coming back from costly mistakes forcing his way back into the team and never looked back.

United’s goalkeeping coach at the time, Eric Steele, who was instrumental in De Gea’s recruitment, said to the Daily Mail: “I can only remember Sir Alex Ferguson missing two United matches. He missed a Manchester derby in 2000 for his son’s wedding. The other time? To scout the brilliant David de Gea.

“I was convinced that a 19-year-old De Gea was the right man to replace him (Edwin Van Der Sar) I showed a three-minute DVD compilation to Sir Alex and then we went to watch him play for Atletico Madrid at Valencia on the night United played Scunthorpe in the League Cup. Sir Alex knew he was the right signing inside 65 minutes. David showed composure, concentration and reflexes. He made one terrific save that went through a load of bodies.”

United stood by David De Gea in his dark times and it could be said that he is standing by The Reds now we are going through ours.

If it wasn’t for the legendary fax machine fail on deadline day 2015 we could be looking at, Real Madrid number 1, Keylor Navas in our net, if the rumours were true at the time.

Let’s appreciate what we have with David De Gea and thank our lucky stars that we have one of the worlds best in our squad.

Underappreciated in Spain for the national team and often criticised for his performances his home is here between the posts at The Theatre Of Dreams.

With our rocky defence, we need Dave to save more now then ever during our current form. Captain De Gea has a nice ring to it.