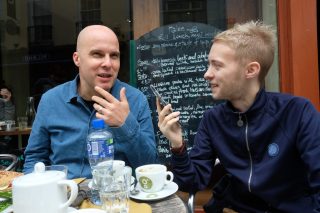 Amid the pain of loss, there were tears of emotional pride as the Miller family marvelled at world football rallying to honour Liam’s life.

Topics such as the music scene between Cork and Manchester are discussed, with Grainger heavily involved in both after gigging in venues such as the iconic Hacienda.

This podcast also includes coverage of the tribute match itself, in honour of Liam Miller, and access to press conferences with Martin O’Neill, John Hartson, Stiliyan Petrov and Roy Keane, Ryan Giggs, David May.

The podcast duration is shorter than most but equally valuable as others. Sit back with a cuppa and enjoy!