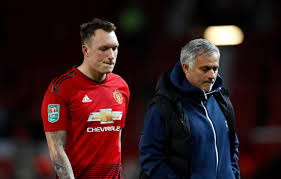 Manchester United manager Jose Mourinho has suggested he thought Phil Jones would miss his penalty last night in the defeat to Derby County.

The Reds went 1-0 up in the first-half through Juan Mata but threw their lead away in the second period as the Championship side raced into a shock 2-1 lead late on.

Marouane Fellaini then managed an equaliser before United lost the penalty shoot-out when Jones’ effort was saved.

Members of the press, including our friends Caught Offside, were quick to assume Mourinho was throwing some sort of dig at Jones. However, we read his quotes differently.

Mourinho, “The penalties come and after the 6th I knew we were going to be in trouble with Bailly and Jones.”

Defenders rarely look the most inspiring when it comes to spot-kicks and it’s downright wrong to make Jones out to be a victim of bullying following Mourinho’s comments, as CoS suggests: “Mourinho made little attempt to protect his player’s confidence afterwards.”

I mean, would you put money on Jonesy scoring a penalty? No… and, given how the penalties were taken at such a high standard at Old Trafford, it was only a matter of time before the least confident penalty takers had to stand up.

Frank Lampard would have looked at his penalty takers with preference. The lads last up are positioned in that order with reason and Mourinho wasn’t having a dig at Jones.