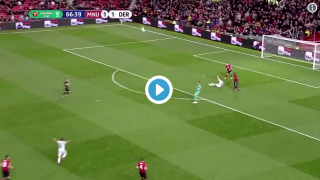 The Reds have been reduced to ten men!

Sergio Romero has been rightly sent off for handling the ball outside the box in Manchester United’s League Cup third round encounter with Derby County.

A fairly innocent mistake, as he comes off his line to clear the ball, and probably isn’t aware that he has left his box, but it still leaves United in a troublesome situation.

This resulted in Juan Mata being replacement by debutant goalkeeper Lee Grant.

The Derby fans then sang ‘there’s only one Lee Grant’ as he entered the pitch.

As things stand, the scoreline is 1-1 and Mourinho has used all three substitutions. If it remains the same at full-time, then the game will go straight to penalties.