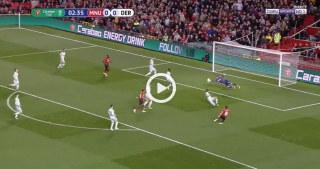 Juan Mata opened the scoring for Manchester United in their League Cup third round clash with Derby County.

The Spaniard hasn’t played much football this season but was given a chance to shine tonight against Frank Lampard’s Derby.

Reflecting on the goal itself, it came from Anthony Martial’s left-hand side and featured some beautiful link-up play between Romelu Lukaku and Jesse Lingard before the ball rolled into Mata’s path.

The former Chelsea playmaker, who played alongside Lampard at Stamford Bridge, then slotted home a beautifully placed finish. It will be interesting to see what his former teammate has to say about the finish at full-time, especially if it contributes to their elimination.

A Cup run this season would soothe tensions but fans will still want to see United improve in the league, which very much remains our bread and butter.

It may be early on but the Reds are in pole position to progress to the fourth round of the League Cup.

The last thing United fans want to see now is the team put their foot off the gas and allow Derby back into the game. And, anything is possible with this team!