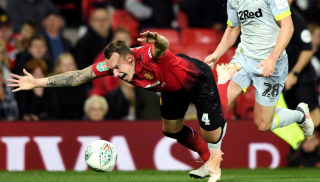 The Manchester United man found himself back in the starting line-up for tonight’s League Cup encounter with Derby County.

At half-time, the scoreline is in United’s favour thanks to an early opener from Juan Mata.

The goal saw some quality link-up play from Romelu Lukaku and Jesse Lingard following a quick attack down the left flank by Antony Martial, who has performed superbly thus far.

In a more light-hearted view of the game, Jones provided a moment of laughter as he covered ground to prevent Derby from launching a dangerous attack.

The centre-half sprung into mid-air in an attempt to pull off some sort of Superman esque act.

It’s not the first time he’s made an overly dramatic move to protect United’s goal.

What is Phil Jones.. pic.twitter.com/aQ5qJIfICI