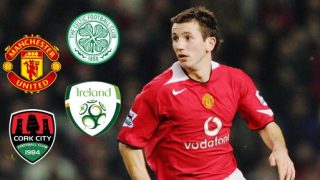 The football world was shook to its core by the sudden passing of Republic of Ireland midfielder Liam Miller, at the young age of 36, due to pancreatic cancer.

Tributes flooded in and Miller is rightfully being remembered today in a tribute match in Cork with high profile former United teammates and staff participating in the match.

Miller started his professional career at Scottish giants Celtic, where he started to build a promising reputation. His time in Scotland included a loan spell in Denmark with AGF.

READ MORE: How to watch the Liam Miller Tribute Match online for free

Rumours began to circulate that Sir Alex Ferguson, keen on energising United’s midfield, was interested in signing Miller, with the youngster earmarked as a successor to Roy Keane.

Under the bosman ruling, Miller ran down his contract with Celtic and subsequently joined United on a free transfer in 2004. Sadly, the only comparison worthy of Keane was in the nationality. Miller only mustered 9 appearances in a red shirt and was loaned out to Leeds United in the 2005-6 season.

Miller was reunited with Keane in 2006, as the then Sunderland manager took him off United’s books as the Black Cats attempted to win promotion back to the Premier League. Keane successfully achieved this mission, but Miller again failed to kick on.

After a brief spell at Queens Park Rangers in 2009, Miller did not have a future on Wearside and was released from his contract.

Miller’s next career move was north of the border, Edinburgh in fact, at Hibernian. Again, his time there was relatively shortlived, another two years.

Miller returned to his native Ireland with a season with Cork City, where today’s tribute match is being hosted. It seemed somewhat of a fitting ending, returning to Ireland where it all began.

His final season in professional football was played Stateside, as Miller turned out for Wilmington Hammerheads, based in North Carolina.

He won 21 caps for his country, with his solitary goal for the Green men coming against Sweden, a goal King Zlatan would have been proud of, a thunderbolt from 25 yards nestled in the top corner as Ireland completed a memorable win.

It is still incredibly difficult to fathom that Miller is no longer with us, 36 an age far too young.

Although he did not make it at United, Miller forged a varied and decent career and the United presence in Cork later today indicates he was very much part of the family.

He will be remembered with the send off he deserves.

May you rest in peace, Liam Miller.