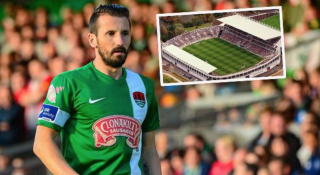 Tuesday’s tribute match in memory of former Manchester United and Republic of Ireland midfielder Liam Miller will be free to watch on MUTV and social media.

Roy Keane will act as player-manager of a United Legends side, including Ryan Giggs, Rio Ferdinand, Paul Scholes and Gary Neville, versus a combined Celtic and Republic of Ireland team at Pairc Ui Chaoimh today in Cork.

The game sold out in a matter of hours for the 45,000 capacity stadium with the match arranged as a tribute to Miller, who sadly passed away in February this year, aged just 36.

Kick-off is 3pm and the game will be broadcast live globally on Manchester United’s official YouTube and Facebook pages. Sky customers in the UK and Ireland can also watch it for free on channel 418, without a subscription to MUTV.

If you can’t attend the #LiamMillerTribute game you can buy an e-ticket for €5 + €2 p&p, donors will receive a commemorative e-ticket, match day brochure AND the chance to win a jersey signed by both teams on the day. Tickets are available at https://t.co/zd9IcjLkCa pic.twitter.com/N75bRNRBC3

SunSport looks back on the career of Liam Miller in an 8-page pullout tomorrow ahead of the Páirc Uí Chaoimh tribute match pic.twitter.com/guyvj1n7Lp