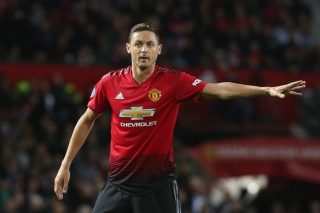 On Saturday, Manchester United drew with Wolves and as predictable as ever the reaction was ‘Sack the Manager/Board/Players etc’. Jose Mourinho claimed they lacked the same aggression and motivation as their opposition.

I was at the game and he was right in the respect of Wolves being hungrier and more determined. They caused a lot of problems and on another day, they would have walked away from Old Trafford with 3 points.

A massive miss yesterday in terms of team selection was Nemanja Matic, the Serbian midfielder was serving a one-match ban after his sending off last week against Watford.

In a game against a very good Wolves midfield of Joao Moutinho and rumoured United transfer target Ruben Neves they couldn’t really dominate the Portuguese duo. Allowing them too much time to dictate the tempo and play long passes into space for their front three to chase.

United played with a midfield trio of Paul Pogba, Fred and the often much maligned Marouane Fellaini operating behind those two to protect the defence.

Fred played one of his better games since joining from Shakhtar Donetsk and he got his first goal after a beautiful disguise pass from Paul Pogba.

However, Wolves came back into the game and really exposed the trio’s lack of defensive instinct, numerous quick passes and long diagonal balls often found men in space and moved further up the pitch.

Nemanja Matic was missed so badly yesterday as were his defensive abilities to sniff out danger and protect the back four. Fellaini does his best but in a game against a midfield that utilises their technical rather than physical abilities then he is exposed.

I don’t blame Fellaini as I understand why he is in the team, he does the job he is told to do and provide much-needed physicality to the team. As well as provide aerial dominance in both penalty boxes.

But Matic adds a lot of subtlety to United as he protects the defence as well as add leadership and a reassuring presence to those around him. It is no secret that in the defeat to Brighton last month he did not play as he was injured. He played an hour in the defeat to Spurs but his lack of fitness meant he had to be subbed off.

He is United’s biggest miss when he doesn’t play and most unsung when he does play. It’s no mistake his return to Chelsea under Jose Mourinho coincided with them returning to the top of English Football. His performance in a Monday night game at the Etihad for Chelsea against Manchester City proved he can play against the best the League has and dominate them.

Yaya Toure said of him ‘To be able to find an opponent to play against me and stop me… there’s few of them, but Matic was one of the close ones who was able to give me problems. He can run. He can fall back. He can track. He can fight. He’s a good, good player’.

Jose Mourinho made him a priority buy in his second season here and for good reason as he would add some of the traits that Mourinho needs to mould United in his image. He provides the foil for Pogba to go and play and do what he does best.

When he is not there, however, the difference is massive as Pogba often comes too deep to influence play, this doesn’t happen too much with Matic as he keeps the ball moving and gives it to the forward players to do their thing.

We all know about Problems with United’s right side with no attacking winger or full-back when Antonio Valencia plays meaning we all lopsided in terms of where the majority of our play goes.

United’s defence is still a concern particularly atcentre-halff with no combination of any of our centre halves nailing down a starting spot. But January is a few months away and we cannot address any problems until then at the minimum after we failed to in the Summer.

Mourinho has to play the hand he is dealt until the Transfer Window reopens and until then he has to manage this squad and keep the winning as many games as possible. He needs to keep certain players fit and free to play and apart from the Obvious one being David De Gea, Matic is the second name for Mourinho on his team sheet.

It’s very difficult to say how the game would have turned out if he had played instead of Fellaini but I think it would have been more positive. But the draw was the result and maybe some fans will realise that he may not be a flashy player, but he is still a hugely important one to the team this season.

Put it this way Matic might not be the life and soul of the party, he won’t be the guy who if he says he is coming to the party means you are going because you know he will make it fun. Matic is the guy who comes and has a laugh and a joke but stays sober enough to order the taxi or be the designated driver to get everyone home.

His absence yesterday might go unnoticed by many, but he is a crucial cog in the United system that many might think is broken but until you can make changes and signings to strengthen areas we are weak he has to play every game he can.

An unsung player of the Mourinho era albeit with a hefty price tag but for me has done well in a United shirt, yesterday just shows that even with all the big names on the pitch yesterday you still need an older head to guide them and do the dirty work.

He won’t make any highlight reels for his skills or goals, but he allows our flair players to play and also does the defensive work that protects and already fragile defence at the minute.

His suspension yesterday proves his worth to the teams as the 3 games he has played 90 minutes (or 93 when he was sent off against Watford). United have won and the games he hasn’t played or not finished the game United have dropped points. So, say what you will against him but as the match against Wolves proved no Matic no party.