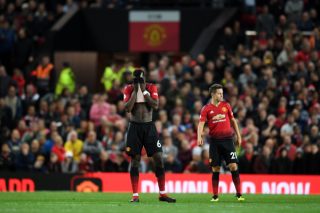 Ander Herrera’s preference is to stay at Manchester United despite interest from Barcelona, according to ESPN.

The midfielder’s contract at Old Trafford is set to expire in the summer and if fresh terms are not agreed he will be able to walk away from free.

Sources close to United have informed Stretty News that manager Jose Mourinho is keen for Herrera to extend his contract at the club while ESPN state Herrera is prepared to snub other offers to stay at Old Trafford.

READ MORE: No Matic, No Party

Herrera has been linked with a surprise move to Barcelona since Ernesto Valverde, his former boss at Athletic Bilbao, took over in 2017. United triggered a one-year extension in the Spaniard’s contract last season but he will be a free agent in the summer and can start negotiations with clubs outside of England in January, though it doesn’t look sound that will be the case.

He has made two appearances so far this season and missed the 1-1 draw with Wolves on Saturday due to injury. One of the games saw him feature at centre-back and the less said about that the better.

Though it was a testament to Herrera as a player. He will do whatever the manager asks of him, hence why Mourinho wouldn’t like to lose such a player in the coming months.

He trained at Old Trafford on Saturday evening following the match and is in line to return to the team on Tuesday against Derby County in the League Cup.