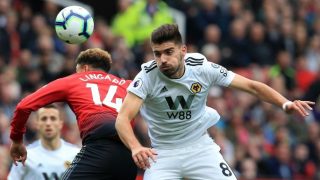 Manchester United transfer target Ruben Neves welcomed praise in the wake of their 1-1 draw at Old Trafford on Saturday.

Nuno Espirito Santo’s Premier League newcomers continued their impressive start to the campaign by holding United to a deserved draw at the weekend – though Jose Mourinho was quick to point fingers at some of our senior stars who he felt “ignored the basic laws of football”.

However, the visitors’ efforts also received praise from the United boss, with reported midfield target Neves arguably their best player on the pitch, pulling the strings and causing havoc.

Praising the display of Neves and another fellow countryman, Joao Moutinho, who scored the equaliser, Mourinho said: “These two Portuguese boys (Neves and Moutinho), they are both the kind of player that likes to bite, that likes to short distance, to press, they don’t give long time for you to have the ball, to turn, one touch, two touches, you don’t have much of that.”

Responding to Mourinho’s praise, Neves said: “We want to do this [play like Mourinho said Wolves did] every game.

“We want to play every game like it the last game of our lives. It’s our job. You can’t think about what you’re going to do in the future until you’ve done things in the present.

“We can’t think about the opponent all the time. If we do things right it’s easier for us. We’re never going to be afraid to play our football. They are not superheros. They are players and if we do things well we can make it difficult for other teams.”

Wolves also took a point from Manchester City this season and Pep Guardiola is also believed to be eyeing up Neves and a future recruit. Whatever happens, there will be a scrap for his signature when he does decide to leave Wolves.

If Nuno’s side continues this great form, they will be in contention for a European spot, but whether Jorge Mendes’ influence at the club is a good thing for the long-term running of the club remains to be seen.