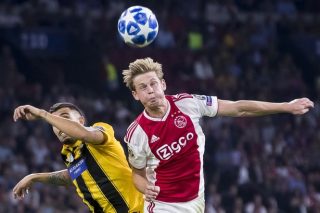 According to De Telegraaf, the battle for the signature of Ajax’s Frenkie de Jong has taken a special turn.

Real Madrid and Manchester United are already among several of Europe’s elite watching De Jong with a view of strengthening their midfield.

The former see De Jong as the successor to Luka Modric in the long-term, although Dutch reports claim he would prefer a switch to Barcelona, who were once in pole position to seal his signature.

De Jong has the technical quality to make a difference at Old Trafford. It remains to be seen whether the plan is for him to replace Paul Pogba, who is clearly unhappy at United, though Ajax are unlikely to let hm leave on the cheap.

And, the Dutch report states that United have registered interest with the player’s agent and/or Ajax.

For those wanting De Jong at United, you should consider it promising that these stories have done the rounds in recent weeks and show no sign thus far of stopping.

The best young players belong at Old Trafford, but Barcelona will argue the same about Camp Nou.