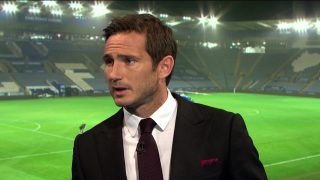 It will be Lampard’s first game against former manager Jose Mourinho just a month after launching his managerial career.

The Rams are currently positioned in sixth place in the Championship after nine games played. They have won five, drew one and lost three league games since Lampard took change of the team.

READ MORE: United After Life – Weight of being a Man Utd player has been too much for some

To reach the third round and to be drawn against United, Derby have beaten Oldham 2-0 and Hull City 4-0.

When asked about playing United at Old Trafford, Lampard said: “I had a pretty good record there with Chelsea.

“But I was fortunate to play in a team with the likes of Didier Drogba, which helps you win games at Old Trafford.

“You feel the magic and history of the place when you go there.

“I want to make the most of an opportunity with eyes on us, against one of the top Premier League teams.”

Ah, the sort of respect we’ve come to expect as Lampard takes on Mourinho for the first time as a manager.

“I had a call from Jose last week but it was all family really,” Lampard added.

“I appreciate the call but we didn’t touch on the game. I guess we’re keeping our cards close to our chests!

“It will be great to see him and to chat. I know he will be supportive of my career – not on Tuesday night, though!

“Jose Mourinho is going to spawn a lot of managers.

“If it makes him feel old, it makes me feel old! What he has achieved as a manger doesn’t need to be spoken about. It’s in the history books.

“I’m a baby, in managerial terms. It will be nice to go up against him and we, as a club, are going up against Manchester United.”

On the game itself, Lampard continued: “I’m under no illusions. They are a very tough team to come up against.

“We are a big underdog – but that should be good for us. It’s a good challenge.”

Congratulations to Frank and Christine Lampard on the birth of their baby girl Patricia Charlotte, from everyone at #DCFC! 😁 https://t.co/9SqS58fcrU