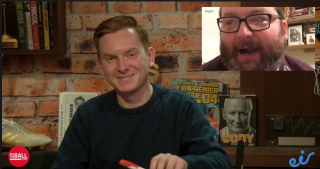 While that has nothing to do with Manchester United, OTB looked back at the weekend’s Premier League action. (See the video below)

Brewin suggests no-one at United is willing to take responsibility for what looks to be another disappointing season. This opinion is backed up by Jose Mourinho blaming the players at the weekend for not obeying the basics of football and Paul Pogba has suggested that the team doesn’t play with the right approach.

Last season, we finished second but were still 19 points adrift of Manchester City. The response to that should have been to strengthen significantly in the summer transfer market but those plans, directed by Mourinho, were scrapped by executive vice-chairman Ed Woodward and that has contributed to United’s stuttering start to the 2018/19 campaign.

Mourinho’s form at Chelsea, as cited by Brewin, took a substantial slide before he got the sack. The former ESPN contributor also states how Mourinho was sent to the stands time and time again when things were beginning to get worse at Stamford Bridge, so that’s a trend we’re should perhaps watch out for if things head that way at United…

Brewin also describes Paul Pogba’s feud with Mourinho as a ‘him or me situation’ as the Frenchman comes out criticising the team’s approach to home games against lesser opposition, such as Wolves after Saturday’s 1-1 draw at Old Trafford.

If Mourinho starts losing respect from his players, which is an essential tenant of how he manages teams, we could be in for a bit of a disaster. The best teams he’s coached – Porto, Chelsea and Inter Milan – were pushed over the line by his man management and that doesn’t appear evident in this United team.

Has the game passed Mourinho by? Brewin appears to think so while suggesting he’s not a great tactician.