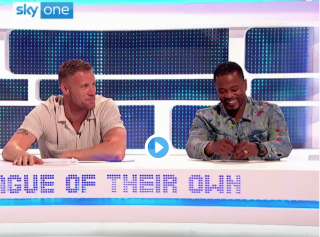 When I launched Stretty News eight years ago, I never quite imagined writing about a footballer taking a dump in another football’s pair of shoes.

Patrice Evra was briefly a teammate of Gerard Pique at Manchester United before the centre-back returned to Barcelona in the summer of 2008.

The Frenchman is known to be a bit of a prankster, especially to his ‘moody’ brother, but he revealed something hilarious during Sky’s A League Of Their Own.

Pique, more than likely encouraged by some of the other United players at that time, had already played a prank on Evra by burning a pair of his trainers.

Taking things to an extreme, Evra explains how he set about taking revenge on the Spain defender.

“They burned my trainers and it wasn’t funny,” Evra said.

“It was actually Gerard Pique, and what I have done to him, I take his shoes, I go in the toilet and I shit inside of them.”

Evra made no secret of his prank by the sounds of it, so we can’t quite label him the Phantom Shitter.

Pique has yet to respond…