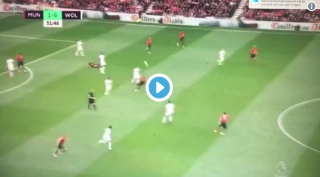 Wolves are determined to show the Premier League is where they belong.

Joao Moutinho or castrated a simply brilliant finish to equalise against Manchester United shortly after the break.

The Reds opened the scoring in the first-half through new signing Fred, who also had a free-kick pushed onto the post before the interval.

We knew Wolves would be a threat going forward and they had David de Gea busy in the first-half. The goal though, is one Moutinho won’t be forgetting anytime soon.

The former Monaco midfielder struck the ball with his left foot and directed it into the top corner, but I think many of us will agree that Paul Pogba needs to do more to get back and support his teammates in deeper positions after losing the ball.

Watch the goal clip below: