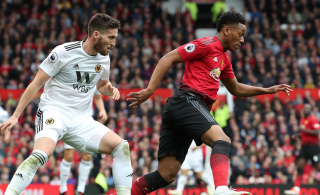 Manchester United’s run of wins came to an end at Old Trafford when Wolves came from behind to force a draw.

Not many will disagree that the result was fair given how Wolves threatened United from the off.

An opening goal from Fred saw the Reds take the lead in the first-half, but Jose Mourinho’s men were unable to keep a clean sheet when Joao Moutinho, formerly of Monaco, struck a wonderful effort on the edge of the box with his weaker foot.

Sir Alex Ferguson, who was in attendance at Old Trafford for the first time since suffering a brain haemorrhage, probably would have thrown the kitchen sink at Wolves at this stage.

However, United were unable to break Wolves down to great effect.

Here is how some United fans reacted to the game on Twitter:

Fair result tbh. United never had it in them to break Wolves down again and they deserved the point.

Plenty of players not doing enough and a typical performance of the last few years IMO.

Your support is fu*king shit from the supporters that threw a flair at the disabled section. Stay classy Wolves 👏

would ye stop. expected a massive game from wolves today and we got it. this is an excellent, excellent side. this is no disgrace. wolves will test the very best of this league and have.

United have played three newly-promoted sides – Newcastle, Brighton and Wolves – in the last seven months and picked up just one point. Goes without saying, but can’t build a sustained title challenge on that sort of record #mufc

The good thing about being a United fan is you can go to the kitchen, make yourself a cuppa and a sandwich, then come back ten minutes later knowing you’ve not missed any action whatsoever.

Sometimes I watch Sanchez and wonder to myself “why do Stoke get all the good ex-Barca players?!” 😄 #MUFC

Disappointing result, disappointing Utd lacked the quality to create, Wolves are a good side but Utd should be beating them at home.