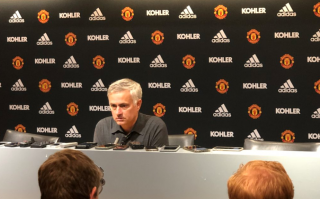 Jose Mourinho has hit out at some of his players after a disappointing 1-1 draw at home to Wolves this afternoon.

The Reds took the lead through Fred, but were pegged back in the second half when Joao Moutinho scored another fine effort to make it 1-1.

Mourinho did not sound happy afterwards, hinting that Wolves wanted the game more than his players.

The Portuguese is often one who takes the credit when things go well, but he is guilty of getting defensive and blaming others when results don’t go his way.

While his quotes today were measured by his own standards, it does seem once again that Mourinho is trying to avoid taking any real responsibility as he questions the commitment of his players.

Mourinho was quoted by several journalists:

Jose: A fair result, #wwfc play the way I like to play.
Wolves play like a World Cup final
They were in the game since the 1st minute.
They had the instensity and the desire and we didn’t #MUNWOL #MUFC pic.twitter.com/nzmpVYiRLI

Jose Mourinho to @BBCMOTD: “I don’t know why but they were more motivated. They deserve their point.”

After all, it is the manager’s job to motivate his players. Click here to see how United fans reacted to the draw on Twitter.