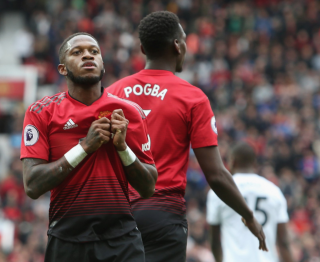 Newly promoted Wolves have no took a point from both Manchester clubs. Here is how we rated each Manchester United player from the 1-1 draw.

Two superb early saves to deny Raul Jimenez and Wily Boly in an early flurry as the visitors started strongly and carved out chances. Had no chance with Joao Moutinho’s superb strike from distance just after half time. Made two huge saves in the second half from Diogo Jota and Ruben Neves. Probably man of the match.

A quiet day at the office for the Ecuadorian on his return to the side. Didn’t do much wrong but didn’t offer much going forward either. After Diogo Dalot’s superb debut in midweek, Valencia just doesn’t give the side the same attacking threat. Solid but unspectacular.

Another quietly impressive game from a player who looks to be the epitome of Man Utd’s upturn in form. A much maligned figure on many occasions, Smalling wasn’t tested too often but did his job well when called upon. Made a couple of good interceptions. Cannot be blamed for Moutinho’s stunning goal.

Same as Smalling in a partnership that looks to be growing and improving by the week. I still think Eric Bailly has to play in any Man Utd back four, but there appears to be an understanding between these two. Mourinho has struggled to find a settled backline but may now have stumbled upon one.
Still not convinced by Lindelof in the long term as I feel he lacks pace and physicality but he’s been solid recently.

Much like Valencia, United’s other full-back didn’t put a foot wrong but didn’t surge forwards as much as we’ve seen this season. Had his work cut out against the pace and trickery of Raul Jimenez and Helder Costa whom interchanged throughout. Also like Valencia, Shaw was solid but unspectacular.

Alongside De Gea, United’s best player, the little Brazilian was excellent. Up and down the pitch, grafting hard, as well as joining the attacksand scoring his first goal for Manchester United. Definitely adapting to English football now. Looks sharp and could have had a second goal before the break. Unlucky to be replaced as United pressed.

Got the nod over the suspended Nemanja Matic in the middle, Fellaini did not have the same influence that we saw at Turf Moor and Vicarage Road, but then again it was a different dynamic for the Belgian. Was always going to be hard for him to contain the twin threats of Wolves string pulling maestros Moutinho and Ruben Neves. Did OK but not great. Went close with a trademark header.

After his brace in midweek, Pogba was a contender for man of the match. This was Pogba at his best – bruising, strong, commanding and he utilised his fully weaponry of passing to devastating affect. His touch and no-look pass for the goal was filthy and, along with Fred, had a very impressive game in midfield. Looked the most likely man to come up with a winner.

Yet to hit the metronomic heights of last season, Lingard was always busy but didn’t have any effect on the game. Sometimes tries too hard, I feel he’s better in the number 10 role where he can link the play more effectively. Deservedly hooked with the game in the balance. Alongside Sanchez, United’s quietest player but still forced a good save from Patricio.

His battle with Conor Coady was pinpointed as one of the key duels, and the Wolves captain kept Lukaku in check and rendered him almost anonymous at times. Flashes of good play but a difficult day at the office for the United striker. Never had a sniff.

Another below-par performance for the Chilean. Cannot accuse his team-mates of not giving him service, and Mourinho’s system is not to blame but we are not just seeing the best of a player who is clearly world class. There were glimpses of the Sanchez we saw at Arsenal, but he wasted two good set piece openings in the first half and on the periphery for long periods. Replaced by Juan Mata.

Been a bit part player so far this term and was unable to have an impact of the game. Quiet. The nicest man in football but is he United standard?

More minutes for the young Brazilian but much like the other substitutes, he didn’t really have an impact.