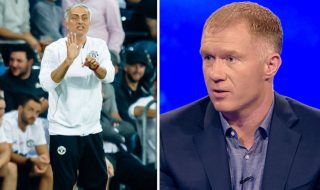 On the back of three consecutive wins, Manchester United are still a work in progress.

The Reds were 3-0 winners against Swiss side Young Boys on Wednesday night to make a positive start to their Champions League campaign.

Goals from French duo Paul Pogba and Anthony Martial ensured the Reds picked up three points ahead of upcoming games against Valencia and Juventus.

United are also on a run in the Premier League following away wins against Burnley and Watford as Jose Mourinho’s men bounce back from disappointing defeats against Brighton and Tottenham.

We are currently positioned in eight-place and six points adrift of Chelsea and Liverpool at the top of the Premier League table.

Mourinho’s side failed to win a trophy last season after winning the Europa League and League in the 2016/17 campaign.

However, United legend Paul Scholes believes the Reds are far from the finished product.

“I don’t think anybody sat here would expect them to go on and win the Champions League or Premier League at the minute.

“It is work in progress as you say, I think it has been for three or four years.”

United haven’t won the Premier League title since 2013 when Sir Alex Ferguson was still in charge.