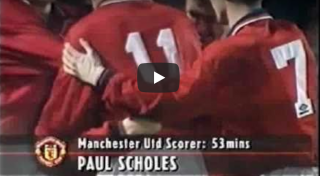 On this day 24 years ago, Paul Scholes, a 19-year-old, made his senior Manchester United debut and marked it with two goals.

Scholes was named in the starting line-up alongside fellow teenagers Gary Neville, David Beckham, Nicky Butt and Keith Gillespie as United faced Port Vale in the second round of the 1994/95 League Cup.

The Ginger Prince wore number 10 on the back of his shirt and scored the first goal of his professional career with a classy dink over Port Vale’s goalkeeper.

His second followed after the interval, a trademark header that he would go on to replicate throughout his illustrious one-club career.

United came back to win 2-1 and eventually progressed by a 4-1 aggregate scoreline following the return leg at Old Trafford when David May and Brain McClair got their names on the scoresheet.

Scholes eventually hung his boots up in 2013 after 718 appearances and 155 goals.

Watch highlights of the game below: