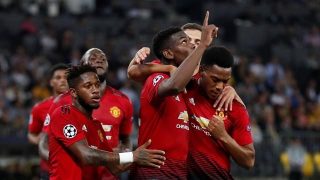 Manchester United will attempt to slow Wolves’ recent push up the Premier League standings when the West Midlands outfit make the trip to Old Trafford on Saturday.

Jose Mourinho’s men go into the game on the back of three consecutive away wins – Burnley, Watford and Young Boys – in the Premier League and Champions League.

Just two points separate the two sides coming into their Week 6 clash, with Wolves’ best recent yet coming against Manchester City in a game that finished 1-1, which proves that Nuno Espirito Santo’s side are capable of an upset.

However, we’re not in a position for upsets anymore after encountering two already in the league this season against Brighton and Tottenham. It’s time for progression and to show the rest of the league that people shouldn’t ever rule out United from bouncing back.

But the manager and players also have a duty to bring confidence back to the table for supporters and it’s evident now they’re working together towards that.

The promoted outfit have also won their last two on the bounce and are unbeaten in their last three. A win for Wolves would see them as far as fifth in the top-flight, though that’s not something we want to consider right now…

As has often been the case during Mourinho’s two-and-a-half-year United stint, there’s been a great deal of scrutiny for the Reds as they go about their search for consistency under the Portuguese – but the very same goes for the players.

Four wins and two losses so far this season may be a decent record for other teams, but not a side with hopes of challenging for the title. There is time to turn things around but without consistency, we’re pissing in the rain.

It’s fair to suspect things will get better and I don’t feel there is quite as much pressure on Mourinho as previous weeks after the recent run of wins.

The Reds are without Marcus Rashford and Nemanja Matic through suspension, so there is a chance for someone to come into the midfield and make their mark. That means Fred could come in alongside Paul Pogba and Marouane Fellaini.

Meanwhile, Andreas Pereira says he is looking for more minutes on the pitch after getting a taste for Champions League success on Wednesday night.

Alexis Sanchez’s place in the side is perhaps in more doubt than ever. A number of fans have questioned his place in the team of late and Anthony Martial took his chance during the week by scoring the winner against Young Boys.

So, selection headaches for Mourinho… He will much prefer that to having players missing due to injury or fatigue from the World Cup, which should be out of their system by now.

While Mourinho has a reputation for being a conservative coach, Espirito Santo has endeavoured to get his Wolves side playing in a way that captivates crowds, and their fans are very proud about that.

Playmaker Ruben Neves is a cracking prospect and one that has been linked with both Manchester clubs in the past, therefore, we’re looking forward to seeing him in action versus United.

Wolves, without question, have been a pleasure to watch this season. It’s nice to see newly promoted sides come up with such an attacking approach rather than sit back and defend until they find their feet in the English top-flight.