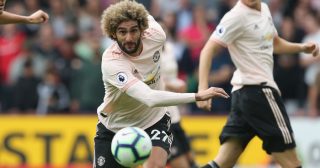 Jose Mourinho seems to have turned around United’s fortunes having picked up three successive away wins after chastening back-to-back defeats in August.

The pressure on the Portuguese manager has all but evaporated and life seems rosy again in the Old Trafford garden. The United boss will face a tough test of his and the side’s credentials on Saturday afternoon as he pits his wits against compatriot and close friend Nuno Espirito Santo, who will send out a newly-promoted Wolverhampton Wanderers side with the bit between their teeth.

Wolves are a side packed with intelligent, technically gifted players with the two sides separated by only a point and a place in the Premier League table. Ahead of the tie at Old Trafford, we’ve picked out three key head to head battles that will go a long way to deciding the outcome.

In the absence of suspended Serbian Nemanja Matic, Marouane Fellaini – impressive in recent wins over Burnley and Watford – is likely to come into the side alongside Paul Pogba and Fred. Mourinho could turn to the energy of Scott McTominay or the nous and guile of Andreas Pereira in the engine room, but it seems likely he’ll go with the height and physicality of Fellaini. Whoever gets the nod in the middle will have his work cut out to keep Wolves star man in check.

The best player in the Championship by a distance last season, Neves was Wolves talismanic, string-pulling creator in chief as the men from Molineaux ran away with the second tier title. Neves has continued that form in his debut Premier League season, scoring on the opening day against Everton and proving himself a real nuisance at the highest level. Premier League matches are so often won and lost in midfield and this looks no different. It’s likely that whoever has the better of this particular individual head to head will play a massive part in the result.

If Neves has been the best player for an impressive-looking Wolves side so far, there can be no doubt when it comes to United’s stand-out man: Luke Shaw.

Shaw has rediscovered the form that earned him his move to Old Trafford and he has been a key man for us so far this season. He’s found himself back in the England squad but the threat posed by the pace, trickery and directness of Wolves top scoring winger Raul Jimenez is arguably Shaw’s toughest test to date. A Mexican international who has played in the Champions League, two World Cups and a Copa America, the loan signing of Jimenez from Benfica was a real coup for the men from the Midlands. Jimenez is his side’s top scorer with two goals in five games, and Shaw will need to show his full repertoire to keep Jimenez in check. It will be no mean feat to keep Jimenez quiet, and – with Wolves already having taken points off the other Manchester club – he is a player we must keep tabs on to stop them doing the same to us.

Wolves begin the season with a much-changed side from the one that took the Championship by storm in 2017-18. In their new-look team, however, Conor Coady has remained the focal figure at the heart of their defence and the captain of the side has stepped up to Premier League standard with the minimum of fuss. Commanding, strong in the tackle and good on the ball, Coady, one of the few Englishmen in the visitors squad, will face one of his toughest tests of the season on Saturday afternoon at the Theatre Of Dreams as he will go head-to-head against the pace and power of big Rom, who netted United’s opener against Watford last weekend after his brace at Burnley. Four goals in the league this season already, Lukaku is just behind Eden Hazard (5 goals) in the early race for the Golden Boot, and he has certainly kicked on from an impressive World Cup for Belgium. This duel between Lukaku and Coady is a mouth-watering one.

United return to Old Trafford with a rare 3pm kick off on Saturday.

We also spoke to a Wolves fan ahead of the game. Read the conversation here.