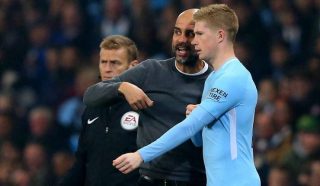 Manchester City playmaker Kevin De Bruyne has given an update on his current injury and the news will not be pleasant for Manchester United.

The Belgium international is one of Pep Guardiola’s best players and his presence has been somewhat missed so far this season, with the midfielders having been sat on the sidelines due to injury since August.

And the former Chelsea man, who worked under Jose Mourinho at Stamford Bridge, has given an update on his injury which may enhance City’s chances against United.

As per Sky Sports, De Bruyne spoke about his injury very recently, stating that: “I still need three, four, five weeks, but I’m getting there. I’m hoping to be back after the next international break. I think I will be back for the derby.”

This isn’t like the Cristiano Ronaldo situation which we want to be solved so that he can make an emotional return to Old Trafford for the second time in the Champions League since leaving in 2009, De Bruyne has no connection whatsoever with United…

City may not look as impressive this season, but it’s early days and things may start to click together when De Bruyne is back pulling the strings from midfield.

The Belgian is a top player and last season, in particular, he was even worthy of being called one of the best midfielders in today’s game, so, of course, it’s a blow for us if he returns in time to face United.

On the other hand, it’s a major boost for City.