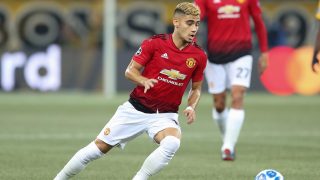 Pereira remained at Old Trafford over the summer following loan spells in Spain with Granada and Valencia in the past two seasons.

The 22-year-old Brazil international came on with 15 minutes to go as United claimed a 3-0 win at Young Boys in their UEFA Champions League Group H opener.

READ MORE: Pereira’s ‘honest’ description of Mourinho may be a dig at former manager

The Belgium born midfielder hopes to get more minutes under Jose Mourinho in the coming weeks, which is even a possibility this weekend against Wolves with Nemanja Matic suspended after getting sent off against Watford.

Pereira said, as per the Daily Star: “It is very good for me. I am learning a lot. I just want to make sure I can do the most for the team and help us win.

“Hopefully, I can do more and more in every game.

“We are confident of getting a fourth win in a row. We have to keep winning and show that we are the best.”

United beat Young Boys thanks to a Paul Pogba brace and Anthony Martial’s strike in Bern.

Pereira, who was recently handed his first Brazil cap, added: “I think it was a very good performance from the players. Winning 3-0 in the first away game, I think is very good.

“It gives confidence for the team and we have to kick on now.

“It was difficult. I think we had to adapt a bit, but that is normal. We always have to adapt to different pitches.

“We knew we had to play here, on this pitch, so I think we did quite well, considering it was the first time that we played on this artificial pitch.”

Pereira’s Brazilian compatriot Fred has made an impressive start to life at United following his £52 million move from Shakhtar Donetsk in June.

Talking about the club’s new midfielder, Pereira said: “He is doing great.

“We are doing our best to make him feel at home as well. You can see that on the pitch – he is playing better and better in each game.”

Mourinho has a number of options to select this weekend following Matic’s absence from the team. Pereira is clearly read and his inclusion would see United quicker on the front foot, but Wolves are an attacking outfit and someone like Marouane Fellaini may be more suited to the role with his physicality.

That may see United start with a midfield consisting of Paul Pogba, Fred and Fellaini but I would like to see Pereira get more minutes than he has done of late.