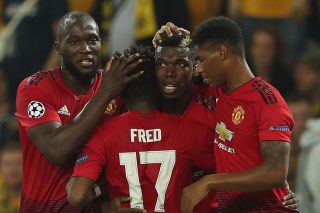 Manchester United got their Champions League campaign off to a win against Swiss opposition Young Boys with Paul Pogba netting a first-half brace and fellow Frenchman Anthony Martial scoring a second-half winner to make it 3-0.

Here are five things we learned from the game.

United’s right hand side has long been short of the required strength in depth, with the only viable candidates for the position two thirty-something former wingers in 33-year-olds Antonio Valencia and Ashley Young. With Valencia’s knee not risked on Young Boys plastic pitch in Bern, Dalot – signed for £19m from Porto in the summer came in for his first-team bow and did not disappoint.

The right-back was a bundle of pace, strength and energy as he regularly bombed forward from the back on the overlap, he’s clearly adept at crossing (a refreshing change for a United full-back) but he also showed intelligence and nous to hold his position well as Young Boys put United under early pressure.

It remains very early days for the teenager, and let’s not forget that Matteo Darmian enjoyed an equally as impressive debut but with Dalot on the right and a rejuvenated Luke Shaw on the opposite flank, our long-term future in the full-back positions look to be in good hands

In tandem with Dalot, Shaw was again simply majestic for United. It’s mad to think that this is his fifth season at the club but he’s as good as a new signing at the minute. He looks every inch the top class defender he was tipped to become when he arrived at Old Trafford with a hefty price tag and even bigger potential. Dogged by injury, personal problems and the wrath of his manager, Shaw has been the one constant in United’s early season wobbles.

Against Young Boys, he was my man of the match and I’m sure I’m not the only one who went for our number 23 as the pick of the bunch. Strong in the tackle, good on the ball, pacy, powerful and direct, United are a team that look a much more balanced and dynamic one with Shaw in it. Further forward, Anthony Martial has been the subject of frenzied transfer speculation but he finally came to the party with his best game for many months.

Handed a rare chance ahead of Alexis Sanchez, this was a performance of constant menace with a goal to boot. Two of the Reds three goals came from the left hand side, an area of the team that still needs work but we effectively got in behind and penetrated vulnerable Young Boys throughout.

Finally, perhaps two seasons later than we wanted, Jose’s United are attacking with a structure, a pattern and a clear plan. It may still not be the swashbuckling style craved constantly by some, but Mourinho’s 4-3-3 system brings a balance and a fluidity and suits the side well. With Nemanja Matic sitting in front, Paul Pogba’s trickery and guile and Fred’s energy and industry – and Marouane Fellaini with the option of mixing things up if needed – this is a system that I feel works best.

This United side is one built to contain and counter-attack, 4-3-3 is perfect for that and we should stick it with as much as possible. Our best form under Louis van Gaal – that six-game purple patch in which we looked the real deal – came when the bizarre Dutchman set us up in the shape but, for reasons only he knows, he quickly discarded it.

With Fellaini in for Fred at Burnley and Watford, United were excellent for the 90 minutes. Balanced, fluid and solid defensively, it was a sign that maybe, finally, Jose Mourinho is not too stubborn to change his ways and that he’s stumbled upon a system and a style that works to a ’T’ for his Manchester United identikit.

United take charge of Group H on Matchday One

With the shadows of Valencia and a doubleheader against Juventus looming on the fixture list, it’s fair to say that United will face far stiffer tests than they did here against the plucky but limited rank Swiss outsiders Young Boys. Even so, this was the Reds third successive win and one that never really looked in doubt from the moment Paul Pogba put us ahead with his sumptuous 35th-minute finish. Professional, clinical and ruthless when it mattered, the Reds sent out an early message of intent that we shouldn’t be written off completely in this season’s competition. It’s never easy to go away from home in Europe, no matter who you are and you can’t argue with three goals, three points, and a clean sheet regardless of the opponents.

The 3-0 result sent United top of the fledgeling Group H standings alongside group favourites Juventus, with the visit of Valencia to come next. Win that and we can turn an already strong position into one that looks even more impenetrable.

Ronnie red rules him out of United reunion

After United were paired with Juventus in the group, there was one subplot that dominated the headlines – Juve’s £99m man Cristiano Ronaldo returning to Old Trafford to face his old Real Madrid manager against the club where he became one of the greatest players the game has ever seen.

Like United, the seven-time defending Serie A champions opened their search for that elusive Champions League crown with a comfortable 2-0 win over the other team in the group Valencia. However, it came at a cost as Ronaldo saw red in the first half in an off the ball incident with Jeison Murillo, earning him a three-match ban and potentially – subject to an appeal – ruling him out of both home and away ties against the Reds. It was his first ever red card in the Champions League on his debut for the Old Lady in the competition.

Of course, Juve will still prove formidable opponents with players such as Pablo Dybala, Mario Mandzukic, Sami Khedira and Blaise Matuidi in their ranks but – should Ronnie miss the doubleheader on Matchdays 3 and 4 then not only will they have lost their talisman figurehead but it would give United an outside chance of causing a shock. Ronnie’s date with destiny looks to have, quite literally, ended in tears.